The types of loads acting on structures for buildings and other structures can be broadly classified as vertical loads, horizontal loads, and longitudinal loads. The vertical loads consist of dead load, live load, and impact load. The horizontal loads comprise of wind load and earthquake load. The longitudinal loads i.e. tractive and braking forces are considered in the special case of a design of bridges, gantry girders etc..
In a construction of building two major factors considered are safety and economy. If the loads are adjudged and taken higher then the economy is affected. If the economy is considered and loads are taken lesser then the safety is compromised. 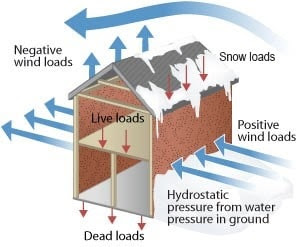 1. Dead Loads (DL)
The first vertical load that is considered is a dead load. Dead loads are permanent or stationary loads which are transferred to structure throughout the life span. Dead load is primarily due to self-weight of structural members, permanent partition walls, fixed permanent equipment and weight of different materials. It majorly consists of the weight of roofs, beams, walls, and column etc. which are otherwise the permanent parts of the building
The calculation of dead loads of each structure is calculated by the volume of each section and multiplied with the unit weight. Unit weights of some of the common materials are presented in below:
Material Unit Weight
“”””””””””””. “”””””””””””””
Brick Masonry. 18.8 kN/m3
Stone Masonry. 20.4-26.5 kN/m3
Plain Concrete. 24 kN/m3
Reinforced Concrete. 24 kN/m3
Timber. 5-8 kN/m3
“”””””””””””””””””””””
2. Imposed Loads or Live Loads (IL or LL)
The second vertical load that is considered in the design of a structure is imposed loads or live loads. Live loads are either movable or moving loads with out any acceleration or impact. These loads are assumed to be produced by the intended use or occupancy of the building including weights of movable partitions or furniture etc..
Live loads keep on changing from time to time. These loads are to be suitably assumed by the designer. It is one of the major load in the design. The minimum values of live loads to be assumed are given in IS 875 (part 2)–1987. It depends upon the intended use of the building.
“”””””””””””””””””””””
3. Wind loads
Wind load is primarily horizontal load caused by the movement of air relative to earth. Wind load is required to be considered in structural design especially when the health of the building exceeds two times the dimensions transverse to the exposed wind surface.
For low rise building say up to four to five stories, the wind load is not critical because the moment of resistance provided by the continuity of floor system to column connection and walls provided between columns is sufficient to accommodate the effect of these forces. Further, in limit state method the factor for design load is reduced to 1.2 (DL+LL+WL) when the wind is considered as against the factor of 1.5(DL+LL) when the wind is not considered.
The horizontal forces exerted by the components of winds is to be kept in mind while designing is the building. The calculation of wind loads depends on the two factors, the namely velocity of wind and size of the building. Complete details of calculating wind load on structures are given by the IS-875 (Part 3) -1987.
“”””””””””””””””””””””

4. Snow Loads (SL)
Snow loads constitute to the vertical loads in the building. But these types of loads are considered only in the snow fall places. The IS 875 (part 4) – 1987 deals with snow loads on roofs of the building.
The minimum snow load on a roof area or any other area above ground which is subjected to snow accumulation is obtained by the expression
Where S = Design snow load on plan area of the roof.
= Shape coefficient, and
S0 = Ground snow load.
“”””””””””””””””””””””
5. Earthquake Loads (EL)
Earthquake forces constitute to both vertical and horizontal forces on the building. The total vibration caused by the earthquake may be resolved into three mutually perpendicular directions, usually taken as vertical and two horizontal directions.
The movement in vertical direction does not cause forces in superstructure to any significant extent. But the horizontal movement of the building at the time of earthquake is to be considered while designing.
“”””””””””””””””””””””
6. Other Loads and Effects acting on Structures
As per the clause 19.6 of IS 456 – 2000, in addition to above load discussed, account shall be taken of the following forces and effects if they are liable to affect materially the safety and serviceability of the structure:
(a) Foundation movement (See IS 1904)
(b) Elastic axial shortening
(c) Soil and fluid pressure (See IS 875, Part 5)
(d) Vibration
(e) Fatigue
(f) Impact (See IS 875, Part 5)
(g) Erection loads (See IS 875, Part 2) and
(h) Stress concentration effect due to point load and the like.