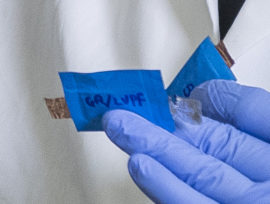 It is difficult to completely eliminate safety problems with lithium-ion batteries, so scientists have taken a big step in developing them to solve the blight of explosions.

Explosive or explosion-proof lithium-ion batteries have been developed by a team of scientists in the United States. These batteries have produced enough energy to be used in home electronics, and the tests have proved that they have not been subjected to any kind of explosion or combustion even when repeatedly punctured with a nail.

The battery uses a salt and water solution as a conductive ionizing medium, eliminating the risks posed by some non-aquatic models. The results of this research were published in Joule.

The lithium ion battery carries electrical connectors or electrodes on the sides, and the battery is charged or discharged through the transmission of ions from pole to other, and assists the electrodes in the middle of the battery, the ions to move. The electrolytes are usually made of the “electrolyte” or “electrolyte”, a substance containing free ions that form a transient medium of electricity, and these organic chemicals are easily flammable at combustion.

“Water-based and fire-resistant electrical electrodes exist, but because water is not active, these safe batteries are not strong,” says Howard Charing Wang, of the University of Maryland who co-authored the new study.

“In the past, if you want high power, you can choose a non-water-based lithium-ion battery, but you have to make concessions on safety. If you prefer safety, you can use a water battery that uses materials such as nickel and hydride, “

Now scientists have developed an upgraded lithium-ion battery that can ensure both high energy and safety, which will never explode and can reach up to 4 volts, the same power as the most common batteries.

Two years ago, the Wang team (working with chemist Kang Xu at the US Army Research Laboratory) set up a 3-volt water-based carrier, but although the electrolyte was safe, One of the electrodes can not carry too much energy.

In today’s paper, water-based electric electrodes have been developed with a special advantage of organic electrodes, which will contain a solid coating that protects the electrodes from damage.

This solid coating is a special polymer gel that forms a stable layer called interphase when the battery is charged for the first time. This phase protects the anode from the chemical reactions that stop it from working.
Water