“If we are going to places like Mars, why not Earth?” Mr Musk asked.

He said the cost per seat would be “about the same as full fare economy in an aircraft.”

Using the BFR (yes, it stands for what you think) long distance trips such as New York to Paris, London to Dubai and Honolulu to Tokyo would be completed in 30 minutes.

The rocket is capable of refuelling in space, necessary for journeys to Mars, and images show the BFR transporting a satellite to orbit, arriving at the International Space Station and on both the Moon and Mars. 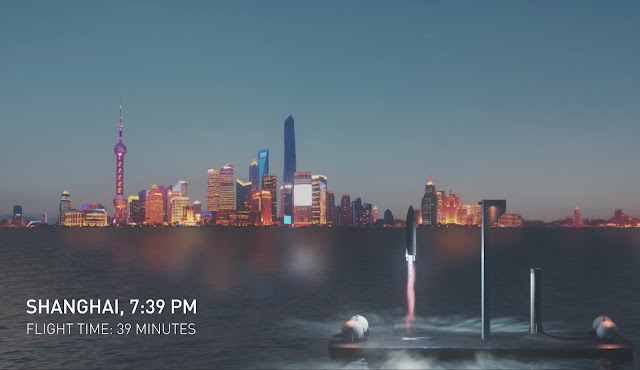 A CGI promotional video shows the BFR’s first stage detaching when the vehicle reaches orbit and turning around to return and land on its own launchpad.

The rest of the vehicle – carrying the passengers – continues on to land on a water-based landing pad near Shanghai after a flight time of 39 minutes.

SpaceX said: “The BFR will be capable of taking people from any city to any other city on Earth in under one hour.”

According to the SpaceX promotional video, the key to Mr Musk’s plans is SpaceX’s ability to land its rockets rather than write them off after every launch.

In recycling the Falcon 9 rockets – whereas its competitors’ are forced to build new ones for every launch – the company has managed to achieve an economy of business which others have not.