Please see my other project with a more powerful TEG:
https://www.instructables.com/id/Battery-Charger-Powered-by-Fire/

Or how to create a self regulated thermoelectric CPU-cooler:
https://www.instructables.com/id/Portable-Airflow-Companion/

Concept:
It is also called a peltier element and when you use it as a generator it’s called seebeck effect. You have one hot side and one cold. The module generates power to drive a motor and the motor fan/air flow will cool the upper heat sink. Higher temperature difference => increased output power => increased motor RPM => increased air flow => increased temperature difference and so on. The airflow will spread the heat into your room, which is the purpose of this construction.
http://en.wikipedia.org/wiki/Thermoelectric_effect

If you unmounts the basement you could also use it as a stove-fan or move air from other heat sources. The motor start to turn at about 15 degrees difference, which to my surprise worked when I just went outdoors with it and the upper heat sink got cooler than the basement. You can place it in hot water, on an ice cube, a pizza and it works just as fine.

Total cost was about 50€ (incl. shipping costs). I used some spare parts but I bought most of it. 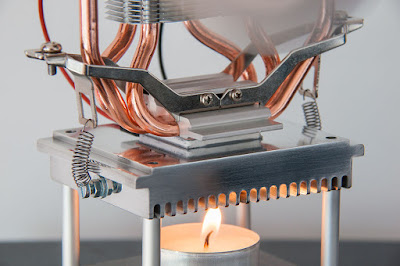 Construction:
First of all, it does not need to be exactly those components. Other heat sinks, TEC/TEG, motor, fan, thermal paste, bolts and base plate can be used. Main concept rules are:

A TEC or TEG module (smaller dimension than upper heat sink base plate). Specifications are not that important but make sure it can handle high temperature. Many modules are only 100 degrees C and then you need to modify the construction as it gets warmer than that.
One hot side that is not hotter than TEC max-temp (My candle flame never touches the surface)
One cold side, an efficient heat sink (heat pipes) are a good choice
Good thermal paste to maximize temperature difference
Low voltage motor, around 1V. I prefer it to be quite (low dB)
Fan with high air flow at low RPM
Base plate that adds stability, holder for light, isolate heat
The lower heat sink (hot side) was cut and polished to get it nice looking. I kept 5mm of the fins to absorb the heat well when the light flame burns and increases distance to the surface. New dimensions are 78x63x15mm. 4 holes are drilled through the heat sink and threaded as M4. 4 bolts will hold the lower heat sink on top of a wooden platform. Bolts go through the platform from below, covered with aluminum pipes for a better looking design and are screwed into the heat sink. The distance between wood and heat sink is 35mm but I would make it 40-45mm as the flame almost touches the surface. You don´t want that because it creates black soot. The lower heat sink gets really warm but at the same time it works as a cooler to not get TOO warm, that would melt the TEG-module.

Result:
I think the hot aluminum part get to about 100-150 Celsius, I measured the temp with a grill thermometer covered in thermal paste but can´t tell how accurate it was. I measured 0.4V and 0.25A with one candle and 0.67V and 0.54A with two. That results in 0.1W resp. 0.36W output power. The efficiency to produce electricity this way is not that impressive though. A candle produce about 25 Watts, that means 0.7% efficiency.. But who cares, everything this machine does will eventually end up in heat any way =) That is a bit interesting, you increase the room-heating speed (I think) but looses nothing..

It is a bit noisy to have running all the time. To find the optimal motor/fan => airflow/noise level will require some more experimenting.

Skip the base platform and bolts and use it as a stove-fan.
Use two/four TECs side-by-side to multiply output power. Add a 5-10mm thick copper plate that covers all modules and then place the CPU-cooler on top of that.
Use a brushless DC motor and a suitable fan to make it noiseless.
Build in a slow motor beneath the platform to make the whole thing spin 360 degrees.
Put wheels on the platform.
Edit:
I have changed the motor to a “Tamiya 76005 Solar Motor 02 (Mabuchi RF-500TB)”. Got it on Ebay. It´s incredibly strong at low RPM and I give it only 0.5V. A very good motor, but best of all, it´s quiet! I cannot hear it at 2m distance at full speed. It also gives stronger air flow. Now I can run it all time =)