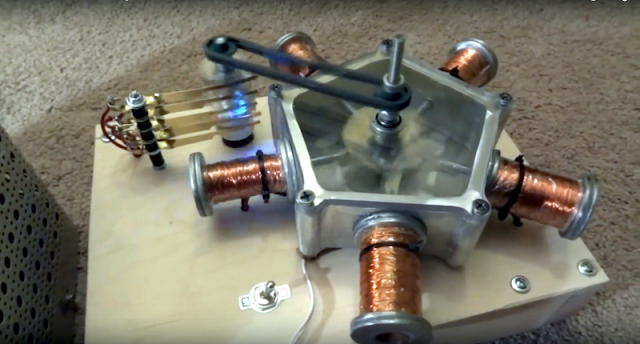 Radial engines are just plain cool – it’s inarguable that any tech that originated with early aviation is inherently awesome. But, what do you do when you want to build a radial engine in your dorm where a combustion engine would be inadvisable? For University of Washington students [Jeffrey Weng] and [Connor Lee] the answer was to power it with solenoids in place of the pistons.

The easiest way to approach a project like this would have been to use a microcontroller. A simple program running on an Arduino could have easily provided the timing to switch power to each solenoid in succession. [Jeffrey Weng] and [Connor Lee], however, took a much more interesting approach by controlling timing via a simple distributor. This works in the same way a spark distributor on a combustion engine would have worked, except it’s actually providing the power to actuate the solenoids instead of providing just an ignition spark.

Also impressive is what they were able to accomplish with such basic tools. Those of us who are lazy and have access to more expensive tools would have just 3D printed or CNC cut most of the parts. Either [Jeffrey Weng] and [Connor Lee] didn’t have access to these, or they wanted to increase their machining street cred, because they created all of the parts with simple tools like a band saw and drill press.