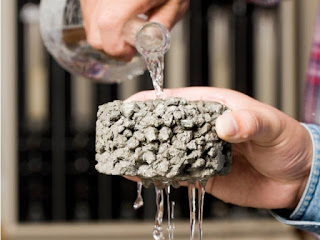 The Permeable Concrete for floor application is a material similar to conventional concrete, but in its mixture is reduced or even? in some cases ? (usually sand), thus generating a volume of voids ranging from 15 to 25%.

The video above had great repercussion when posted on our network. For most people who comment, this is the ultimate solution to all urban drainage problems. Some conservatives do not believe it is a viable alternative and cite several technical problems. In this text we will try to explain how it works, to demonstrate successful experiences and its limiting factors.

The traditional drainage system captures the water that flows superficially on the waterproof floor and tries to direct it to a body of water as soon as possible. The problems that this generates are well known: erosion and silting of water bodies and ciliary forest, changes in water quality, floods, need for contingency works such as flow retention basins, among others.

However, here we can indicate the first technical problem of porous concrete. In the conventional system one of the reasons why the water is redirected is due to the destabilization of the base layers of the pavement, which can collapse its structure. Already in the porous concrete, the intention is to make the water percole to the water table, giving a destination? More natural? to the waters, thus occurring a natural filtration and preventing that the speed of arrival to the body of water causes the damages already mentioned previously. However, it is necessary to rethink the basic structure of the pavement, since it must have the capacity to store the water during a certain period (so that natural infiltration occurs in the soil or to the alternative drainage system), without its support capacity being altered .

Another major problem cited by critics of the system is that, once the small aggregate is removed, the strength of the concrete must drastically reduce. This is true, as long as concrete technologies are not adopted to repress this effect, which can end up increasing the cost of the final product.

Another point that should be considered in the system is its cost of implementation. Generally, the direct cost of the product is higher than the conventional cost, but the solution should be thought of in a Macro way. Other factors such as reduction of drainage system and water quality should also be considered.

An experiment in the coastal town of Provincetown, Massachusetts, is under way. The problem of closure of the beaches in high season to the bathers due to the quality of the water was constant. It was then that in 2012 a stretch of about 2,400 meters on the main commercial avenue of the city was replaced by permeable concrete. The number of beach closures due to bacterial contamination (in addition to other elements) reduced drastically, which led to new phases of the project, increasing the implanted extension of this type of solution.

Due to the problems of concrete resistance and the ability to support the base layers, this type of flooring is generally recommended for areas of low traffic and load, such as parking lots, sidewalks, etc. However there are some applications for situations of heavy loads on the pavement, such as on highways. In these cases, one of the main factors is the cost, because technologies must be used to mitigate pavement resistance problems.

In Brazil one begins to observe some movement of companies to implement this type of solution, but its technologies are usually licensed by some foreign patent.