The core is made out of protons and neutrons, thickly stuffed together. Hydrogen, the lightest component, has one proton; the heaviest regular component, uranium, has 92 protons.

Amid splitting, a neutron barrages a uranium molecule, discharging more neutrons and setting off a chain response. 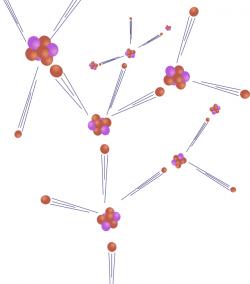 The core of an iota is held together with awesome compel, the “most grounded drive in nature.” When barraged with a neutron, it can be part separated, a procedure called splitting (envisioned to one side). Since uranium particles are so extensive, the nuclear constrain that ties it together is generally frail, making uranium useful for splitting.

In the center of atomic reactors, the parting of uranium particles discharges vitality that warms water to around 520 degrees Farenheit. This boiling water is then used to turn turbines that are associated with generators, creating power.