Warning: Use of undefined constant REQUEST_URI - assumed 'REQUEST_URI' (this will throw an Error in a future version of PHP) in /home/ramala2s/public_html/viraleng.com/wp-content/themes/Newspaper/functions.php on line 73
 How to Jump-Start Your Car Battery in Ten Steps | ViralEng 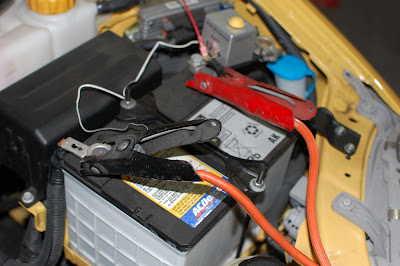 1-Park a car with a functioning battery so its front is as close to your car’s front (pointing toward one another). Leave at least 18 inches of space between and never let the cars touch.

3-Get out your jumper cables. Make sure none of the metal clamps touch one another. Notice that each set of clamps has one red clamp and one black clamp.

4-Open both car hoods. Locate the batteries and battery terminals. Terminals are usually covered in red or black, with a + or – sign on top. Make sure that you can identify which is positive and which is negative.

5-Attach the red cable clamp to the positive (+) battery terminal of the dead battery. Make sure there is a solid connection to terminal.

6-Next, attach the other red cable clamp to the functioning vehicle’s positive (+) battery terminal.

8-Do not connect the final black cable clamp to the dead battery. Instead, attach that clamp to an unpainted, metal part of the car, such as a clean nut on the engine block. This will help ensure a safe jump.

10-To disconnect the jumper cables, start with the black cable clamps. Do not let them touch while any part of the cables is still attached to a car.

viraleng - 06/04/2019
5
Organic farmers have found an effective solution to pesticides, thanks to “flame weeding,” which is exactly what it sounds and looks like (via Boing...

The wrecked Ethiopian plane: Boeing has stopped working all its 737 Max aircraft after...

viraleng - 06/04/2019
0
Boeing has halted all flights of its 737 Max aircraft after investigators found new evidence at the crash site. Boeing said it had suspended...

after a space flight The ball for the opening match of...

10 Reasons Why a Car Won’t Start

How does a biogas plant work?