Going for a long ride, check for water in your vehicle, wait what don’t they run on diesel or petrol. Yeah right why we need water then. Water is circulated in engine to keep it in optimum operating temperature range. Yes, we have got an optimum temperature range, we cannot cool it down too much neither we can afford it go above a safe temperature limit.
Ever imagine what would happen if your engine cooling system is not working properly, you will end up welding the piston rings to your engine cylinder walls, due to expansion of piston rings due to excessive heat. so now it’s very clear that we need to 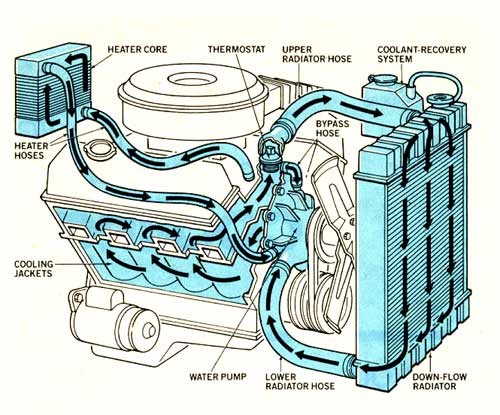 It is Named to be the heart of engine cooling system. Water pump has a radial impeller inside its casing, which is driven by engine itself. Serpentine belt is used to deliver rotational motion of engine main pulley to the water pump pulley.

Radiator acts as a heat exchanger for an engine. it is usually made up of aluminium, and have lots of small diameter pipes with fins mounted on them. It exchanges the heat of hot water coming from engine with surrounding air. it also has an inlet port, outlet port, drain plug, and a pressure cap.

As name suggests it is a temperature-sensing device in engine cooling system and it monitors the engine temperature. It provides the data required to control the operation of radiator fan. The engine temperature display at driver’s console gives reading according to the data provided by coolant temperature sensor. Further, in the ECU controlled vehicles its data is used to optimize the fuel injection and ignition timings of engine for better performance of vehicle.

In engine cooling system,these rubber hoses are required to make connection between water pump, radiator and engine so that water or coolant will flow through them thus completing the circuit.

It is a plastic tank generally mounted close to radiator and has inlet port connected with radiator and one overflow outlet. It is the same tank where you put in water before ride. 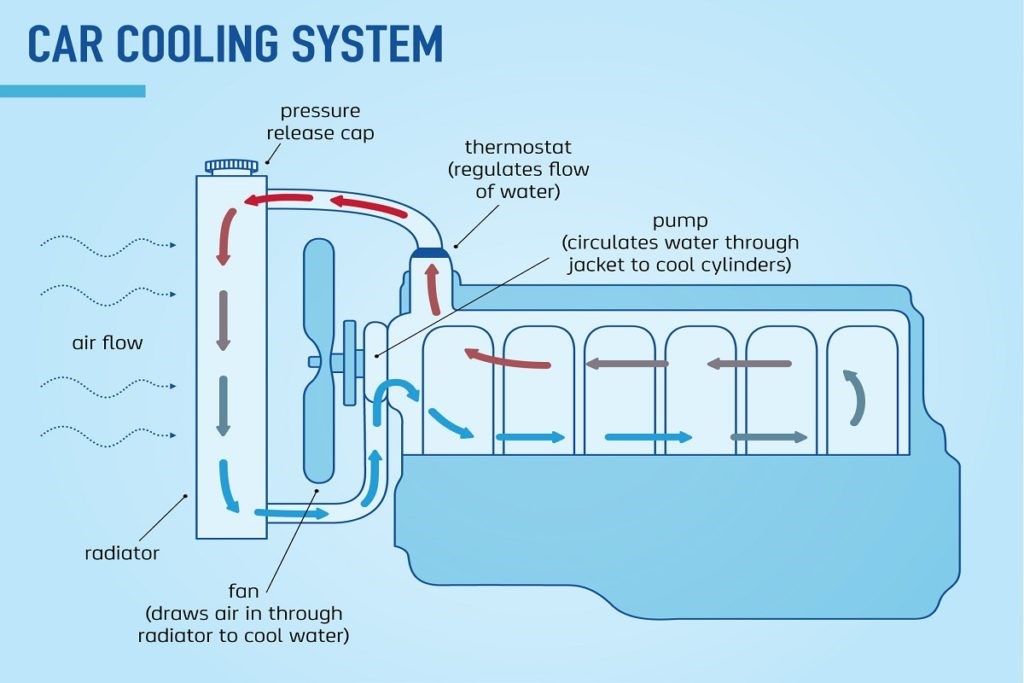 As piston moves up and down in engine cylinder due to the pressure created by the gases formed as a result of burning air-fuel mixture. We have water vents along the length of engine cylinder in engine block, and these vents circulates through engine head  and remove the heat, with flowing water from the engine in best possible way.
So let’s start with water pump and let’s say engine just start and is cold. Water pump inlet and outlet is connected to the engine with help of rubber hoses. We have thermostat mounted in path of outlet  to the engine, so Water is pumped by this radial pump through thermostat into the engine water vents, thermostat does not allow the water to go into radiator circuit  until engine is at low temperature, and water comes back to pump through outlet hose. Coolant temperature sensor is mounted just near the thermostat.
As water keeps on circulating it extracts heat from the engine and its temperature rises. As it reaches a temperature between 160 to 190 Fahrenheit, it melts the paraffin wax in thermostat and opens it up. So now this hot water is circulated through radiator circuit.

What’s interesting is that we let the hot coolant flow through the another heater core and make the air blow through it using blower, thus using this heat to keep ourselves warm in car in winters.

For better understanding about the working of cooling system of an engine watch the video given below: