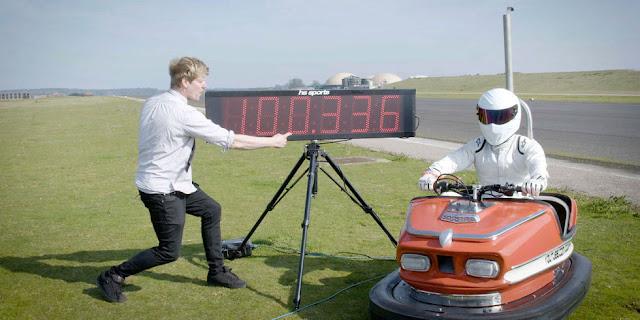 Bumper cars are designed to move about slowly. You need them to be engineered this way otherwise a bumper car ride would end with plenty of whiplash, tears, and probably some lawsuits.

So a bumper car ambles about with just enough speed so that you and some friends can gang up on another friend and pin them into a corner, while repeatedly taking turns smashing into them. Don’t try and deny it. We know that’s what you do.

The bumper car you’re going to see right now, however, is a bit faster.

Colin started with an old Dodgem bumper car shell. Then he added a 600-cc motorcycle engine which is good for 100 horsepower. That’s quite a lot for something so small and light.

It’s enough to propel the crazy craft down a runway at triple digit speeds. In fact, it’s fast enough that it now wears the title of World’s Fastest because a representative from Guinness was on hand to certify the runs. The Stig took the Dodgem down the strip running once in each direction. The average speed was just over 100 mph, and the wind-assisted speed was actually over 107 mph.

Now we know what Colin needs to do next. Build more of them, print up a bunch of waivers, and let us all have a go at the craziest game of bumper cars the world has ever seen. Wait. They already have that. It’s called Demolition derby…